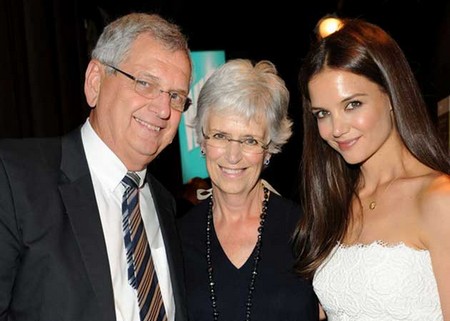 Katie Holmes‘ parents Martin and Kathleen Holmes never wanted her to marry Tom Cruise, so they are relieved she is kicking him to the curb.  Katie filed for divorce from Tom after 5 years of marriage.  The main reason for the divorce is unknown but many speculate it was Tom’s obsession with the Church of Scientology.  Apparently, now that their daughter Suri Cruise is getting older, Katie was afraid Tom would get her more involved with the church.

“When Katie decided to marry Tom her parents were concerned.”  A source revealed, “Both Martin and Kathleen had very strong reservations about Katie marrying Tom, but she was an adult and they obviously couldn’t stop her from following her heart. It’s been tough for them over the past five years to watch Katie be controlled by Tom and they really felt that they had lost their daughter to some extent.”

Her parents are sad for Katie because they do not want to see their daughter unhappy but at the same time they are glad to have their daughter back they have missed her over the past five years.

One thing for certain now that Martin and Kathleen have their daughter back Tom Cruise is not in control anymore.  Where do you stand on the issue Team Cruise or Team Holmes?  Hit the comments and let us know!