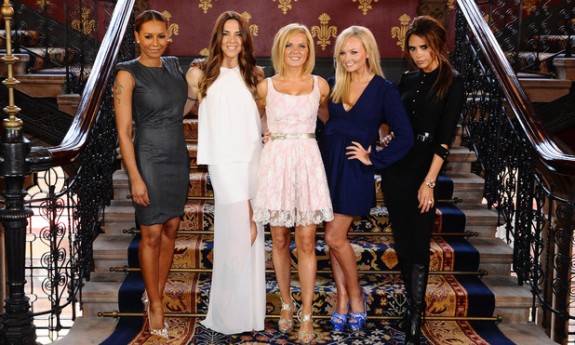 Former Spice Girls star, Mel C has hit back at reports who claim Victoria Beckham couldn’t wait to leave the four girls (Geri, Emma, Mel C, Mel B) after they reunited at the Viva Forever musical launch. Victoria, who jetted back just hours after attending the launch, looked miserable as she stood by the smiling girls who all seemed overjoyed to be having a musical based on their own songs.

According to reports, Beckham returned back to Los Angeles within hours to tuck her baby, Harper back to bed in time – which seems to be a ridiculous reason, knowing that these girls hardly ever see each other. However, Mel C has stood by the fashion designer’s side, despite reportedly falling out several times within the last four years as Beckham refused to contact her former band mates.

“It’s annoying when people say Victoria wasn’t smiling or didn’t want to be there. She really did. It was a flying visit and both her and Melanie [Brown] were exhausted as they’d flown in from Los Angeles,” Mel C explains to The Mirror. Mel, who has enjoyed a successful solo career, away from the Spice Girls seemed to disapprove of the rumors that Beckham didn’t want to a part of the project.

Mel added: “She was so tired but, among us, she was on great form. It’s great that she decided to make the trip at all. She’s a very busy lady and in the middle of designing a new [fashion] range. It’s certainly not easy for her.” It has been said that if the musical hits off to a great start – it’s being written by the story-writer of Mamma Mia – all five girls will earn at least $5 million.