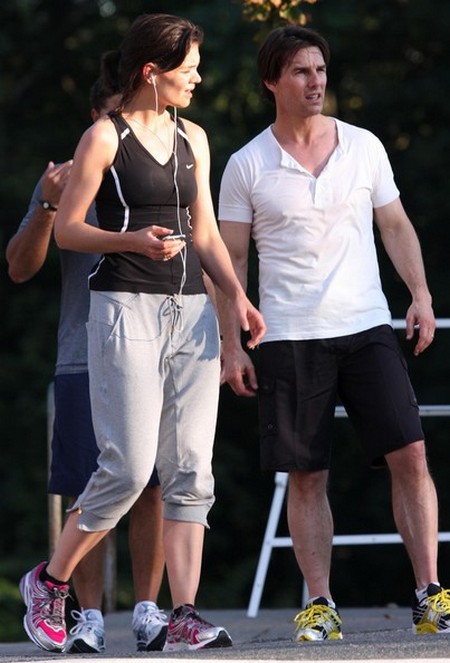 The more we hear, the more it seems the writing really was on the wall for the end of Tom Cruise and Katie Holmes’ marriage. It’s kind of hard to believe that Tom was blind sighted by his wife’s filing, especially since on his last visit to NYC he was NOT staying in the couples’ apartment with Katie. Not only that, but Katie was seen going back and forth between her shared apartment with Tom and a newly acquired one that is now hers alone.

Tom stayed at The Greenwich Hotel while in town and on two unexpected occasions Katie brought Suri to visit with him for a few hours. A TMZ source spoke with people in Tom and Katie’s original apartment building and they can’t remember the last time Tom was seen on the property.

We have heard that Tom and his team of people had absolutely no clue that an official split was coming but how could they not have had a clue? By all accounts this couple was living separate lives in separate locations more often then not. They were quite obviously having a multitude of problems and usually the biggest red flag is when a couple sleeps apart, by choice. If Suri has only visited with her supposedly doting father twice in the month of June, as this report would indicate, it makes me wonder if Katie has purposely kept Suri from him. Maybe this divorce is about to get a whole lot nastier in the coming days.

As more information is coming out, what are your thoughts on the power couples’ break up. Do you think Tom was really that surprised? More importantly, do you think a public, ugly custody battle is in the works. Tell us your thoughts in the comments below!