Katie Holmes Will Fight To The Death For Her Daughter Suri 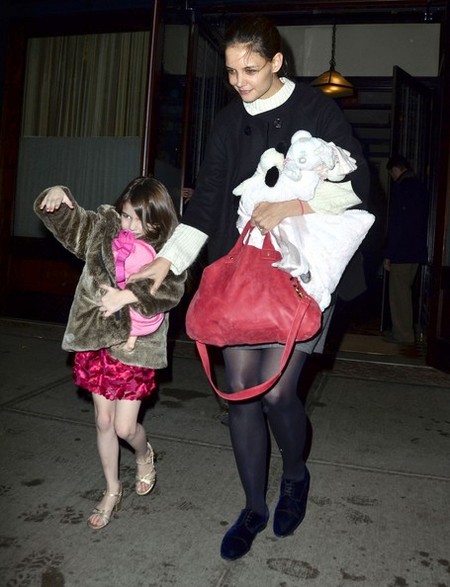 Katie Holmes and Tom Cruise split on Friday, after a 5 year long marriage. Katie requested sole custody of Suri, so we suspect that something major happened to Katie in order to take control of her child’s life.  Katie doesn’t want Suri raised as a Scientologist and we’re not really surprised by that. The weekend has been filled to the brim with Tomkat articles, ranging from the bizarre to the insane. Who thought this Hollywood power couple would be so blown apart?

A source close to the actress told Radaronline.com, “She wants her to enjoy a ‘normal’ upbringing with a wide variety of friends and a good schooling. She believes that will not happen if she is raised as a Scientologist; it’s one of the major things she and Tom fought over when they were together. Now they are apart she is adamant she is going to have Suri raised outside of the church. Katie even enrolled Suri in a Catholic pre-school a few years back, which Tom grudgingly agreed to after a lot of fights, but not as a long term measure. He wants Suri raised and schooled as a Scientologist and wants her friends to be fellow Scientologists.”

This isn’t a bad Omen remake and Damien isn’t hiding behind a corner, waiting to steal Suri’s soul, but who would want their child raised in a religion (the term is used loosely) which was brewed together by a man who eerily resembles a young Michael McKean? Who is Michael McKean, you ask? Google L. Ron Hubbard images and then Michael McKean, you’ll be not so pleasantly surprised.

The source adds, “He truly believes in the church and its teachings and truly believes that it is imperative that his children are raised as Scientologists. Tom believes Scientology changes people’s lives for the better and, obviously, he wants what is best for his children. Tom will move Heaven and Earth to ensure Suri stays a Scientologist, at least until she is of an age to make a decision to leave on her own accord. But until then, make no bones about it, Suri will be raised within the church.”

Yes, Tom also thought that it is imperative that he stars in Rock of Ages and we all know how that turned out… So no, Tom, we don’t trust your judgment, especially with a little child’s vulnerable mind.

What will happen in the custody battle? Well, according to this, it seems that Scientology will not be playing a major role in the defining decision, “If there are tenets in the religion that spell out certain ways to raise a child, and Katie doesn’t feel that’s working for Suri, maybe because she’s acting out a lot, or not doing well in school, or has developmental issues, then that would be what she uses — the litmus test would be what is in the best interest of the child,” Los Angeles divorce lawyer Grace Jamra said.

We’re gearing up for a custody battle of apocalyptic proportions and we’re truly hoping that Suri survives the war. She is the innocent little person in this whole saga. Not even all of the forces of Xenu would be able to tear away a mother from her child, so Katie, from us to you, fight to the death and do not let scary-grin Tom Cruise steal her away from you!