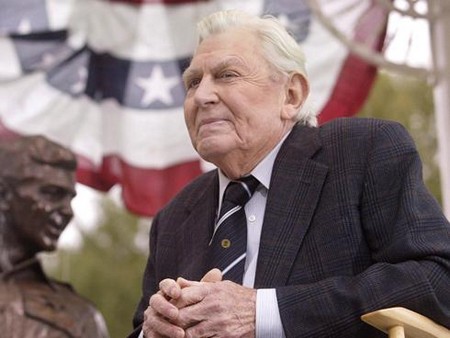 TV legend, Andy Griffith, died early this morning at the age of 86. The news of his passing was first reported to a North Carolina television station by Bill Friday, former president of the University of North Carolina and a Griffith friend.  Dare County Sheriff Doug Doughtie had already confirmed to the station earlier that an ambulance was sent to Griffith’s home in North Carolina.

Andy began his career doing monologues and then shifted into films. The eventual small screen icon shot to fame in “The Andy Griffith Show” which ran from 1960-1968.  In it he played widower Andy Taylor, sheriff in the fictional town of Mayberry.  The show also starred a young Ron Howard as Opie and comedic legend Don Knotts.  A famous statue of Andy and Opie still stands in Raleigh, North Carolina.

Andy eventually returned to televisions nationwide in 1986 as Ben Matlock, a Southern lawyer. That show ran until 1995 and was often a comedic punch line because of it’s’ popularity with the older crowd.   In an old “Simpsons” episode, a highway is renamed the Matlock Expressway so a town mayor can win the elderly vote. Andy also popped up in the 90’s hit show “Dawson’s Creek” and was a Grammy award winning southern gospel singer.

Andy Griffith was also awarded the Presidential Medal of Freedom by George W. Bush in 2005.  He is survived by wife Cindi and his daughter Dixie. The Griffith’s son Andrew Jr., known as Sam, died in 1996.

Are you an Andy Griffith fan?  Do you still watch the old Mayberry reruns late at night?  Tell us what you personally will remember most about this legend, in our comments section below.