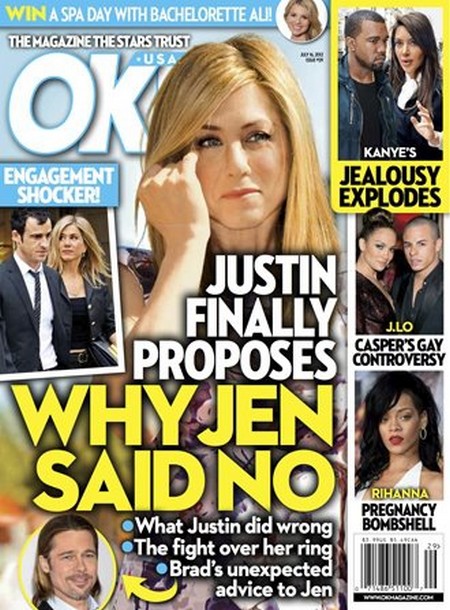 It looks like Justin Theroux finally got up the nerve to propose to Jennifer Aniston at the tail end of a two-week European vacation.  The actress, who always talks about marriage and babies, shocked her boyfriend of a year by saying no!  The new issue of OK Magazine has all the details but rumor has it that Jen felt like he only popped the question because she had been pushing him to do so.  Their last night spent in Paris supposedly turned ugly because finally cornered him on what she believes to be his commitment issues and naturally, a big fight followed.  He got defensive and stormed out leaving Jen sitting alone in her hotel room in the city of love.

Also in the new issue of OK, it looks like Kanye West’s jealousy is starting to creep into his relationship with Kim Kardashian.  I’m going to have to assume that she does not appreciate him screening all of her phone calls!  Is Casper Smart really gay?  That rumor has built up a little momentum this week and I’m going to go out on a limb and guess that his girlfriend, Jennifer Lopez isn’t too happy about it.

It seems like we’ve heard everything imaginable about Rihanna and she pretty much has shown us every inch of herself, via her Twitter, but now her friends are speculating about pregnancy.  Let’s face it, it was only a matter of time before the words Rihanna and pregnancy were used in the same sentence!  According to the new issue, her friends are worried that her very risky behavior will lead to pregnancy- or worse for the troubled young star.

Has Eric Johnson canceled the wedding?  Supposedly Jessica Simpson’s inability to drop the baby weight is causing frenzy at home and the stress on the couple is ridiculous.  Pick up the new issue of OK for more in-depth coverage of these stories and more.