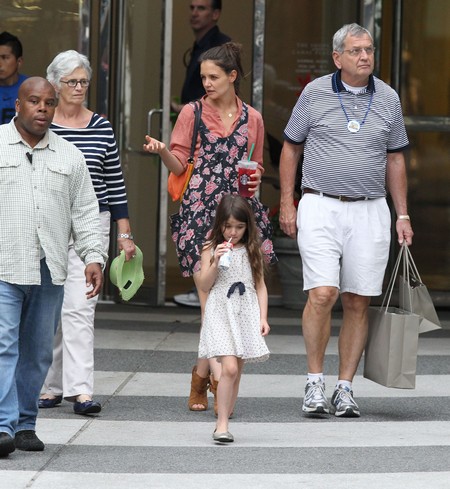 We’ve been hearing for years that Katie Holmes father, Martin, does not like Tom Cruise and has never been too keen on his daughter’s marriage to the megawatt star. The 67-year old father of five is rumored to have taken his legal prowess and helped set the divorce filing in motion for Katie.  Martin practices in the area of matrimonial law and would be the best possible person for her to have turned to when she decided it was time to dig herself out.

A  Toledo attorney that has worked with the older Holmes recently told People Magazine,

“Marty is very rigid – it’s his way or the highway.  Marty believes there are only two sets of rules: the rules of the court and his rules, and he carries himself that way.”

While all the little details are starting to seep out, one this is for sure, Katie’s parents and sisters must be thrilled to have her back.  There were reports of tension between the star and her family throughout her entire relationship with Tom.  Her parents in the beginning were vocal about feeling that their daughter was being controlled by Tom and Scientology.  Now it looks like they really were right in spite of Katie’s earlier claims like this one to Vanity Fair back in 2006, when she told the magazine,

“Some of the crap that’s out there – the stuff that’s said about my parents and my siblings not hitting it off with Tom, it’s really frustrating.”

It must have also been frustrating lying to herself and everyone around her and pretending that she had embraced Tom’s control freak ways and was willing to just do as she was told.

Do you think Katie was stuck under Tom’s thumb while they were married?  Was there really dissension between her and her family?  Tell us your thoughts in the comments below.