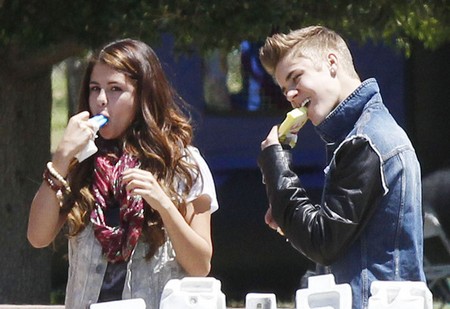 TMZ has exclusively revealed that Justin Bieber and Selena Gomez have broken up multiple times in the last few months, like the lovesick bunnies that they are.

Shakespeare said, “Speak low if you speak love” but we’re not a hundred percent sure Shakespeare realized that the world will be attacked with an onslaught of high pitched Beliebers, wanting to get frisky with The Bieber,

TMZ reports that Justin and Selena ended things last week, but are trying again, like your Uncle Charlie broke up so many times with that stripper named Candy Cane who had good morals and a penchant for cake. Why do female exotic dancer always like cake?

Justin Bieber and Selena Gomez have been dating for roughly a year and a half, but imagine the intense pressure these teenagers are under.   Dating Justin Bieber would be like dating a manic Christmas caroler who repeatedly rubs his abs in the snow. We can never really fathom the true intensity of puppy love, until we are smack bang in the middle of it. Justin and Selena are not ordinary teenagers who like Angry Birds. He is the biggest pop star in the world and she is- Well, she is also a singer.

TMZ reports that their relationship is not currently “solid, but they’re figuring things out”.

This whole situation reminds one of a very, very popular song by My Chemical Romance which goes something along the lines of, “They say that teenagers scare the living s**t of me!”

What do you think readers? Is this whole thing done like Fukushima? Let us know in the comments below.