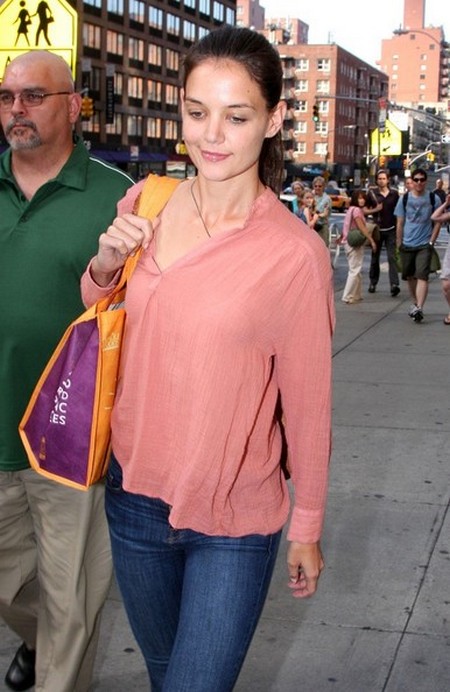 Everyone needs advice, even Katie Holmes, who is going through a tricky split from Tom Cruise.  She has reportedly reached out to none other than Sandra Bullock for a bit of advice on how to navigate the waters of a messy public split.  If you remember, Bullock made headlines for months back in 2010 while splitting with cheating husband, Jesse James.  The Star magazine has a bit of inside information on the friendship.

“They met years ago through their mutual friend, Keanu Reeves, and Sandra knows all too well about being in a bad marriage – she’s been a real comfort to Katie“. The magazine also claims that Katie wanted to divorce Tom last Christmas, with the insider adding, “[She] started talking very quietly to her lawyer”.

Over the weekend, news broke that the former Hollywood power couple is hoping to settle their issues out of court.  They called a “temporary truce” when it comes to legal proceedings.  If they can come to a mutual agreement on property, finances, child support and most importantly- Suri, then court can be avoided.

Tom reportedly doesn’t want his family (or Scientology) dragged through the mud by an ugly battle but Katie is bound and determined to retain full custody of Suri or all bets are off here.

How likely do you think it is that they will be able to sidestep court?  Suri is probably the only real issue here.  I’m betting everything else can easily be agreed upon but Suri, I think they will both want custody.  Katie is said to be dead set on full custody because she saw first hand how the joint custody arrangement that Tom had with ex-wife Nicole Kidman, ultimately cut her from their kid’s lives.  There’s no way Katie will want to risk that.  What are your thoughts on them settling this peacefully?  Tell us in the comments below!