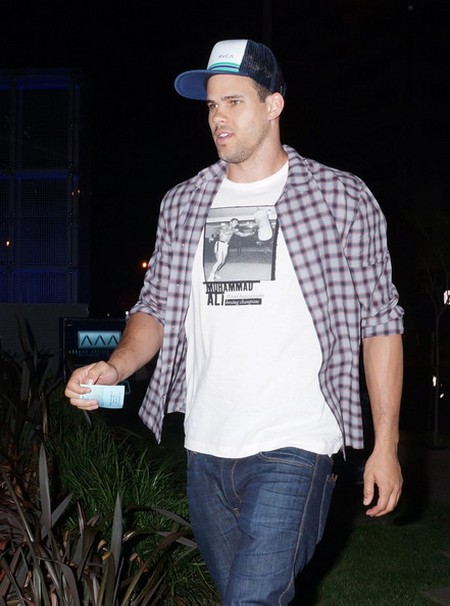 Being publicly called a liar never helps anyone already tangled in a court battle- just ask Kris Humphries.  The athlete has clearly had a hard time getting over the resentment of feeling duped into a 72 day marriage by ex, Kim Kardashian.  He has been relentless about taking her to court and making her admit certain things under oath, until now.  Now it seems the winds have shifted and Humphries looks like he may be quite the liar himself.

In the last month, Myla Sinanaj, has been very vocal about her relationship with the former Nets star. She spoke to the press about him being her boyfriend and he emphatically denied it referring to her as a “booty call girl”.  Things got a bit messy in their war of words but one thing is now for certain, Sinanaj is  three months pregnant and claiming that Humphries is the daddy.  “He will ask for a paternity test when the baby is born. He had been claiming that their relationship was pretty casual, that she was a ‘booty call’ girl.” says a source.

How does this development affect Humphries divorce battle?  Well, he probably doesn’t want the Kardashian’s referencing this situation as proof that he is capable of lying to the press.

“Kris is now being advised to settle with Kim and move on. Proving that the marriage was fraudulent, and he got duped into it will be a very, very hard argument to win at trial. Kris is still hell bent on going to trial. He wants to publicly humiliate Kim as much as possible. What Kris doesn’t seem to grasp is that he could end up paying for Kim’s legal fees if the judge rules against him. Kris needs to let go and move on, he says he has done so, but he clearly hasn’t,” the source says.

Do you think this ugly divorce battle will now all go away in a nice, quiet out of court settlement?  Should Humphries just fold on his court battle and focus on praying that he isn’t the father of Sinanaj’s kid?  Tell us your thoughts in the comments below!