Rita Ora On Meeting Beyonce: ‘She Told Me Just To Be Myself’ 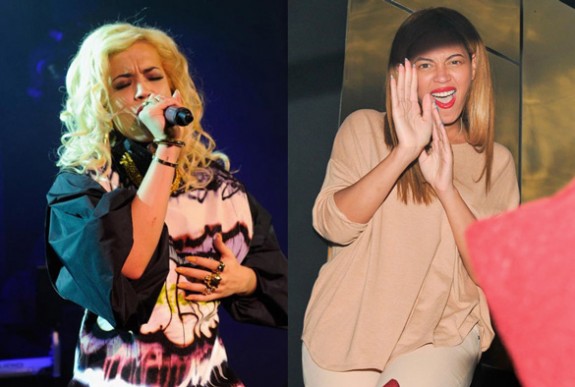 Rita Ora is becoming a household name, not only in Europe, but also in America. She’s signed to Jay-Z‘s label, RocNation – the home for many artists such as Willow Smith, Alexis Jordan, J. Cole and Rihanna – so there’s no doubt that she’s in good hands. Now, the benefit of being signed to Jay is that you get to meet cool people, such as his wife Beyonce Knowles, who attended Rita’s gig a couple of months back.

The Grammy winner came out to support Rita and like what she was hearing, and when the two met backstage after the show, Beyonce gave Ora some good advice that she should always keep, no matter what anyone else says. Marie Claire recently sat down with the ‘RIP’ singer, when the question was brought up what she makes of it when people say she’s the “new” Rihanna.

“It’s a compliment to be compared to Rihanna. But you do have to hold your own. If you know yourself then everything else will follow – that’s what Beyoncé told me. She was always one of my idols, so to have her in my face was amazing.”

Rita will debut her debut album ‘ORA’ later this year.