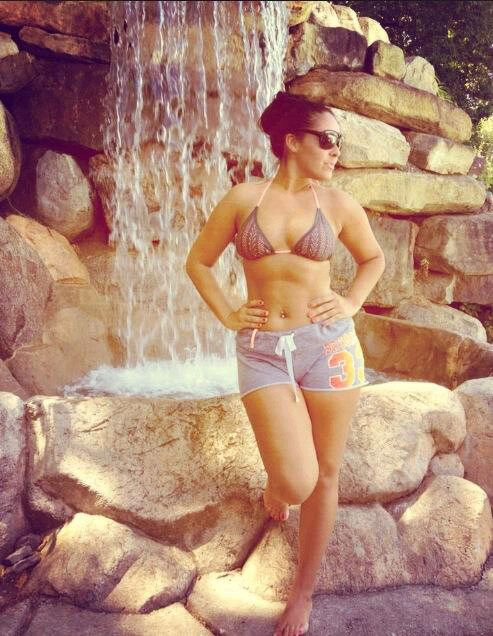 Is she pregnant or isn’t she?! Who knows?! Myla Sinanaj – ex-girlfriend to Kris Humphries – has posted a picture of herself on Twitter in a bikini, with no baby bump showing. Myla, who was rumored to be carrying Humphries’ child, with some reports even confirming it, Sinanaj seems to be teasing her followers with the picture, as she says there’s no baby bump.

People have since speculated that the picture on her Twitter page is and old picture because she looks much slimmer in the shot than she does now. However, Myla says that she’s filming a video to finally clear up all the rumors and fake stories from “sources” that claim this and that. “Uhhh ooooo Loook No babyy bump!,” she wrote on her page “#Shocker yes I’m a thick curvy girl *All natural I’m comfortable in my skin.”

Wanting to stop people to gossip about her in a negative way, she adds: “I’m getting everyones tweets and I know u guys are 100% right I’m going to clear things. Up out of MY mouth for the 1st time not ‘sources’… This is something I should have done a long time ago but I thought keeping quiet & ignoring was best but enough is enough.

“I’m doing a Video right NOW that I will Post with the TRUTH out of MY mouth and kill all these ‘sources’ story’s #overIT” Whether she’s pregnant or not, we’ll have to wait and see. But then, if she is, the question remains: Who is the father? We’ll get Maury to do the test!