Tom Cruise Made His Choice: He Chose Scientology Over Daughter Suri Cruise 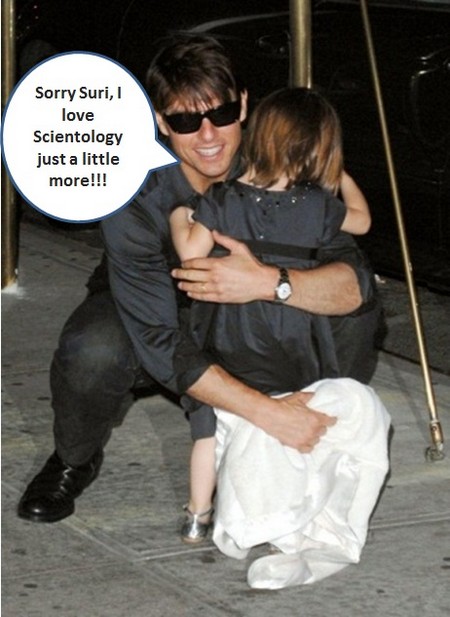 Marty Rathbun is Tom Cruises’ former “auditor’ for Scientology and he is weighing in on the actor’s split from Katie Holmes.  Rathbun conducted confession sessions, known as audits, with Cruise for a few years before leaving the church in 2004. Since leaving he has become an outspoken critic of Scientology.   He firmly believes that Scientology has divided this family and that ultimately, Cruise chose church over his little girl.

“Yes, I think that Tom Cruise chose his religion over his daughter Suri and I also think that (Church leader) David Miscavige pressured Cruise to settle the divorce quickly,” Rathbun tells RadarOnline.com exclusively.  Apparently Miscavige is also Cruises’ best friend- in fact he acted as best man when Tom married Katie back in 2006.  The couple even honeymooned on Miscavige’s yacht.

Scientology has taken a lot of heat these past few weeks, as its crazy teachings have been analyzed and dissected in an attempt to understand how it pulled this Hollywood power couple apart.  It’s no wonder Miscavige would want Tom to quietly settle things just to make the bad press go away!   It is obviously in Suri’s best interest to do so, but if Tom did it because the church demanded he do so, well that really does show where his loyalty is.

Obviously, it is in Suri’s best interest to be in the custody of her mother, but do you think Tom agreed because he really thinks it’s where she belongs?  Or is it really because he needed to stop the disrespect that the whole situation was bringing to the religion that he believes so strongly in?

Tell us your thoughts in the comments below!