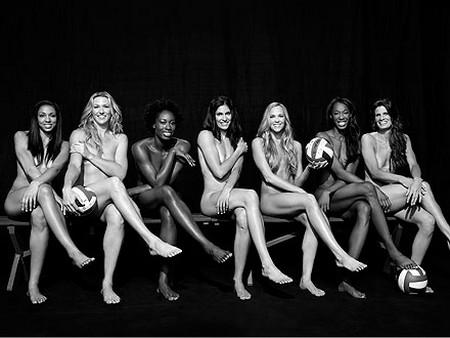 Olympians spend a lifetime training for the opportunity to compete truly on the world stage and the last two seasons heading into an Olympic year mean hardcore, pivotal training.  The London Games are just three weeks away and the U.S. Women’s Volleyball team decided to show the world just what tip-top condition their bodies are in as they cover the new issue of ESPN Magazine– naked.  The issue, which hits newsstands this Friday, will feature nude silhouettes of the women as well as a group shot of the team sitting on a bench together.

Athletes are usually very comfortable with their bodies and after changing in locker rooms for most of their lives they are pretty comfortable with others catching a glimpse of them in various stages of undress.  How comfortable was this shoot for the ladies?

“I was a little nervous about doing the shoot, but looking back, I’m glad I did it,” said team member Megan Hodge. “I thought it was a cool, once-in-a-lifetime opportunity to show the world the work we put in every day.”

Most everyone was quite comfortable on set, but not Destinee Hooker’s boyfriend.

“My fiancé wanted to be at the shoot because he thought other men … were going to be there. He doesn’t like the thought of others seeing me nude, but it’s an opportunity of a lifetime.”

There is always a parade of well-toned, half dressed, athletic bodies in print leading up the the games.  Did ESPN take it too far?  Should the women be dressed or do you think the photo shoot turned out beautifully?  Tell us your thoughts in the comments below!