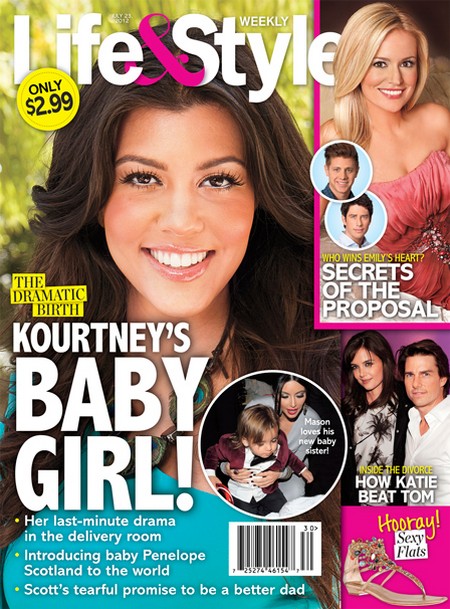 Kardashian fans have waited for months for Kourtney’s new baby to finally make its grand entrance and last Sunday, Penelope Scotland Kardashian was finally born at Cedars Sinai hospital in LA.  This week’s new issue of Life & Style Magazine has the cover all the latest info on the family’s bundle of joy.  They have the inside track on Penelope’s dramatic delivery and details from the family, all of which was present for the special occasion.  Scott Disick has hardly earned the title, “father of the Year” for his parenting of 2 year old Mason, but he is said to be vowing to change his hard partying ways in order to morph into a better version of himself.  New babies are tough to integrate into the family, but new big brother Mason is said to already love his baby sister.

As this season of The Bachelorette winds down, Life & Style has new details on the man that ultimately has won Emily Maynard’s heart.  Learn how Arie and Jef have handled things right down to the wire and read about which man finally managed to tip the scale in his favor and why.

It’s pretty amazing to think that in under two weeks Katie Holmes filed for divorce from Tom Cruise and successfully settled everything without a huge court battle over their daughter Suri.  I think most people expected that mess to turn very ugly and so Katie is looking pretty victorious at this point.  Life & Style has new details on how the actress got everything settled on her terms.  Grab the new the new issue to read more about these stories and so much more!