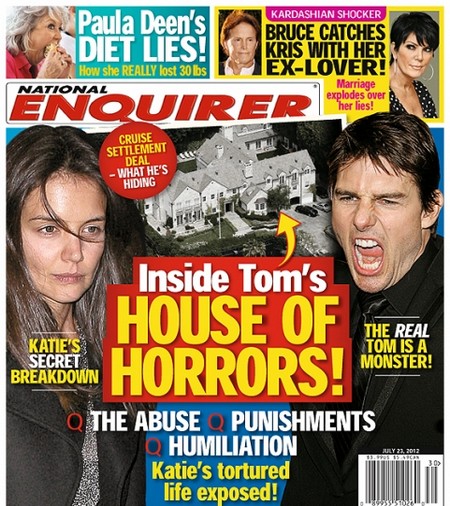 Just because Tom Cruise and Katie Holmes settled things out of court, that doesn’t mean others embroiled in the divorce drama won’t be dragged before a judge.  Yesterday Tom Cruise’s attorney Bert Fields, fired off a zinger of a letter threatening to sue the National Enquirer for slandering his client.  Luckily, The Hollywood Reporter obtained a copy of this letter and decided to share it with readers and industry insiders.

“As you were notified in advance, your current issue of National Enquirer makes numerous false and defamatory assertions about our client Tom Cruise,” the three-page letter begins. Fields proceeds to call these claims “disgraceful and lurid” and will cause the actor “hundreds of millions of dollars of professional and personal damages, for which we intend to hold American Media, and everyone who participated in the perpetuation of this scurrilous attack, jointly and severally liable.  Your cover announces, as a fact, that ‘THE REAL TOM CRUISE IS A MONSTER.’ Mr. Cruise is certainly not a ‘monster.’ He is a caring father, a hardworking actor and, above all, an honest, decent man.”

The article itself claimed that Tom abused Katie and forced his daughter, Suri, to stay in a windowless, tiny room for five months. Fields had an answer to those claims as well,  “Mr. Cruise’s home in Telluride, like his home in Beverly Hills, is a pleasant and loving home,” the letter reads. “Suri was not forced to stay for five months in a tiny windowless room. She spent most of her time with Tom and Katie. She slept in a nursery adjoining their bedroom. It has a window.”

Do you think that behind closed doors Tom Cruise could actually be a monster?  Do you think there’s a shred of truth to any of the things that the Enquirer has claimed in the last few weeks?  They say the truth often lies somewhere in the middle, but the way Katie appeared to just run from him, well, it makes me wonder what the real story is.   Tell us your thoughts in the comments below.