Lewis Hamilton Cheating On Nicole Scherzinger? Caught With 10 Girls In His Hotel Room 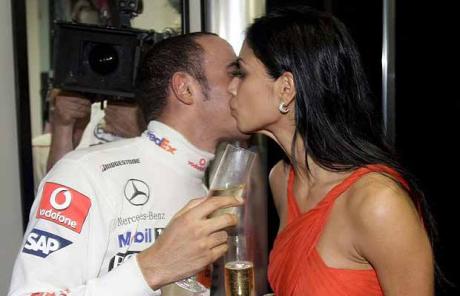 Lewis Hamilton is in big trouble. The Formula 1 star outraged his girlfriend and former X Factor judge, Nicole Scherzinger after spending £3,800 on a one-night penthouse suite in the Mayfair Hotel with TEN girls, who didn’t leave the room until 5:30AM in the morning. Lewis seemed to have been having a good time as rapper J. Cole was also in town, the two got together and things started going wild.

There has been a lot of problems in their relationship, ever since the two got back together in November, after a three month break. Hamilton is not happy about Nicole signing on to judge the UK’s X Factor after she received the boot from the US version. He told her several times that if she goes against his ways, they were going to have problems – which led to the hotel drama.

A source close to Nicole said the following: “She is seething. She can’t believe he would be so disrespectful to her in this way. It’s not the kind of behavior she expects from him. Lewis is in serious trouble. He wasn’t thrilled when she accepted the X Factor job, so there have been massive tensions. Now things have reached crisis point. Nicole is demanding explanations and a discussion about their future.”

Scherzinger has since been officially named the fourth and final judge to mentor the acts on X Factor UK.