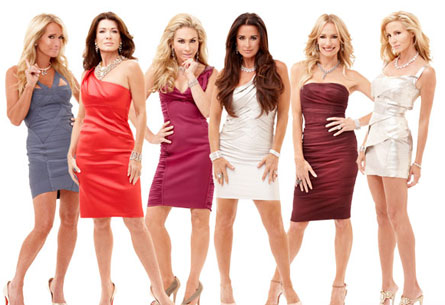 Paris, the city of art, love and drama!  The Real Housewives of Beverly Hills are going to embark this weekend on their first international trip as a group and they’re going to Paris as their destination of hysterics.  Mon Dieu!

RadarOnline reports that the ladies have taken several trips this season to Ojai, California and Las Vegas, Nevada. These trips were always filled with alcohol and the salty taste of tears and Cover Girl eyeliner, but when the cast visited Las Vegas, Brandi Glanville (ex-wife of Eddie Cibrian) was taking pole dancing lessons for a new gig as a hostess of bachelorette parties. Taylor Armstrong melted down like a nuclear power plant which experienced the wrath of God one morning when the air tasted like person. She was heavily intoxicated throughout the trip, like that friend of yours who is always drunk at parties and ends up in a steamed up car on the outskirts of town, oblivious to the fact that she gave her clothes away to a homeless person named Dunky McGee.

Lisa Vanderpump, Brandi Glanville, Kyle Richards and Yolanda Hadid are all bound for Europe, but Taylor is still crying in a cup of vodka infused pancreas.

RadarOnline.com, “Taylor is still trying to decide whether or not she wants to go. Taylor is just acting very sneaky and secretive recently. It’s almost as if she is trying to create some mystery around her. Adrienne Maloof decided not to go because the other girls keep ganging up on her, and it just got to the point of being utterly ridiculous. Kim Richards most likely won’t go even though the other ladies want her to, because she just wants to spend time with her kids. Kim doesn’t feel quite strong enough yet to go overseas and wants to put her sobriety first.”