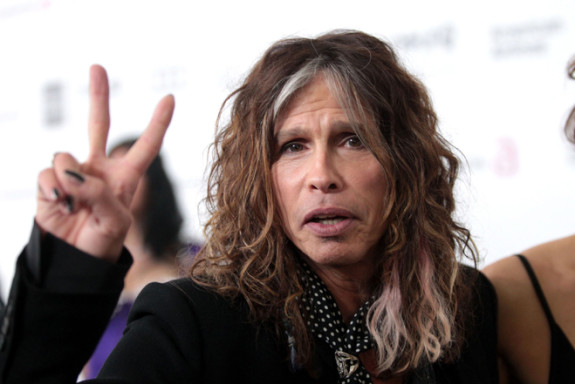 American Idol‘s most popular judge, Steven Tyler has announced that he will not return for the show’s 12th season, starting audition stages later this year. The singer’s statement came one week before it was reported that producers of the show were looking to refresh the judging lineup, seeing that Jennifer Lopez has hinted that she isn’t too interested on coming back, while Randy Jackson isn’t bringing “anything new to the table”.

“After some long hard thoughts, I’ve decided it’s time for me to let go of my mistress American Idol before she boils my rabbit,” Steven says in the official statement.  “I strayed from my first love, Aerosmith, and I’m back – but instead of begging on my hands and knees, I’ve got two fists in the air and I’m kicking the door open with my band.

Steven’s salary per for season 10 was around $10 million, but raised by “several millions” due to producers fearing he would leave the show. There has been no word on if Tyler’s salary would have been boosted up again if he would have stayed, but it’s more than unlikely, due to the drop in the ratings of the show, during its most recent season.

He continued: “The next few years are going to be dedicated to kicking some serious ass – the ultimate in auditory takeover. Idol was over-the-top fun, and I loved every minute of it… Now it’s time to bring rock back. It’s been a tremendous honour to have Steven – one of the most prolific artists in the world – on American Idol for the past two seasons.

“We are very sad that Steven has chosen to focus more on his music, but we always knew when we hired a rock ‘n’ roll legend, he would go back to the music. We all wish him all the best and would love to have him back on the show anytime.”

Simon Fuller, creator of the talent show, added: “If you had told me ten years ago he would be a judge on American Idol, I would have thought it impossible. The fact that this became a reality and we had the pleasure of him gracing our stage for two seasons makes me very proud. I completely understand his desire to get back to his life as the singer in America’s greatest-ever rock band.”