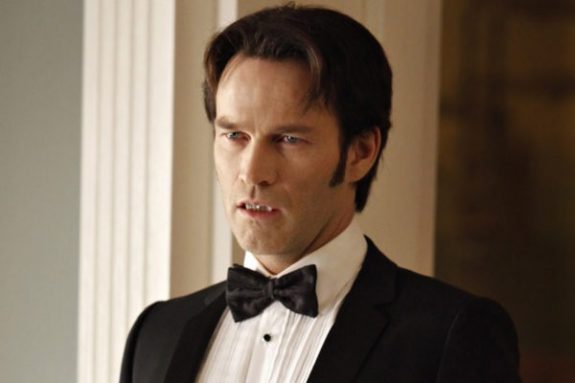 Stephen Moyer has played vampire king, Bill Compton on the hit series True Blood for the past five seasons and his character has both boys and girls swooning.  So much so that even boys are inclined to ask him to bite them! “I’ve been asked to bite in West Hollywood. If the person looks clean and wholesome, I might oblige.” says Moyer in a new interview in The Advocate.

Some fans of the show are dying to see Bill and his sometime adversary, Eric played brilliantly by Alex Skarsgard finally get down and dirty with some hot vampire sex.  It’s an idea that Moyer, married to bisexual Anna Paquin, is all for!

Q: Speaking of sexual tension, when will Bill and his adversary Eric just get it over with already and have angry vampire sex?

A: I’ve been asking myself that question for a long time. Alex and I would absolutely embrace that. Last year, when Sookie had her fantasy about the two of them with her, we even suggested it. Of course, Bill and Eric together isn’t necessarily Sookie’s fantasy.

Q: Do you see the bromance building between Bill and Eric as they’re forced to become greater allies this season?

A: Yeah, it’s a situation where the two of them realize that it’s pointless to be against each other. They’ve both been rejected by Sookie, and they’re both in deep water because of what they’ve done, so they both know that the best thing to do is to join forces. I like to think that somewhere in their past, maybe the ’40s, ’50s, ’60s, or earlier on, Bill and Eric were actually friends and partners in crime. I think they had a messy breakup, which is why there’s an animosity between them when we first see them in season 1. Hopefully we’ll get to see what really went on between them in a future season.

The shows legion of fans are crossing their fingers that this scene will play out on screen.  Much of the True Blood slash/fan fiction includes very graphic, detailed hook ups between Bill and Eric. The LGBT community has also totally embraced these characters and has been very vocal in its support of normalizing the same sex dalliances that occur on screen in True Blood. Moyer is grateful for the support of this community saying,

“I feel very at home in that world, so I’m very pleased about it.”

Are you hoping for a Bill and Eric hookup?  Do you think a round of hot vampire sex between the two would be too much or is it time that the writers’ give many of the fans exactly what they are asking for?  Tell us your thoughts in the comments below!