Antonio Banderas Wants Melanie Griffith To Forgive Him For Cheating 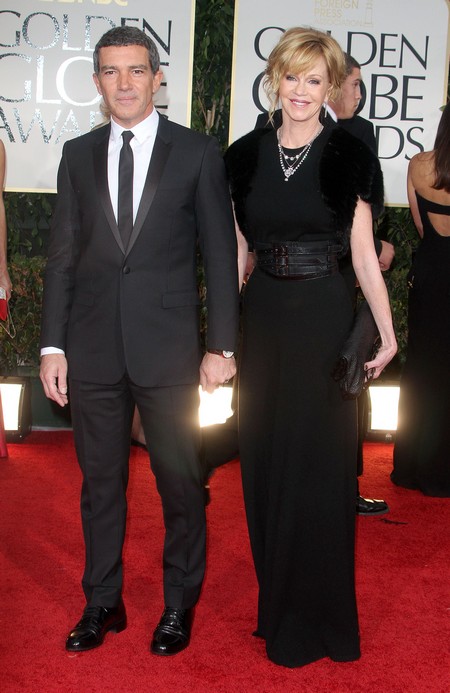 Antonio Banderas has been trying to stop his marriage from going to divorce court. The actor is married to longtime partner Melanie Griffith and it has been reported that he has been cheating on his wife of fifteen years.

Their wedding rings disappeared last week. Our grandma also disappeared last week at the carnival, but was luckily found later sitting with a clown and singing songs about “the good Lord”. A source tells RadarOnline that Antonio has gone into crisis mode and is contemplating the full effects of a nervous breakdown.

Griffith is finally responding to his lovey-dovey antics.

“Antonio has been desperately trying to win Melanie’s trust back. He has been doing everything in his power to revive the romance – flowers, sweet-talking on the phone and extravagant gifts – because he realizes that she is close to her breaking point.”

Griffith was finally spotted last week with her wedding ring on. Where did it go Melanie? Did you throw it at Antonio in a fit of jealous rage? Did you wash it down the toilet along with the pet fish named Lenny and found it again in the sewers filled with crocodiles?

“She is playing hard to get,” the source revealed. “She has always known how to keep him on his toes and it wasn’t a coincidence that the cameras caught her with her wedding ring off! Ultimately she will probably stay with him but not before making him squirm”.

Griffith is vacationing with the kids in Hawaii and Aspen, keeping her distance from the Spanish heart breaker.

The source says, “The day Antonio flew into Los Angeles for a work gig, Melanie left with the kids for Aspen. She isn’t messing around. The last thing Banderas wants is a nasty high-profile divorce. Despite their problems he still loves her and will do anything to keep her from leaving him.”

Antonio, your face is old and Melanie looks like a corpse who was found wandering the streets one cold morning when the wind was howling and children were being eaten.

Don’t cheat on the woman whose mother was eaten alive by birds, Antonio.

You should know better.

Hollywood Dirty Divorces – How The Millions Will Be Split