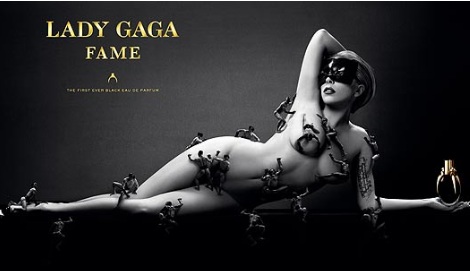 Lady GaGa does whatever it takes to make people pay attention and more often then not, her outfit turns heads.  For her new fragrance, Fame, the diva has decided to bare all- or almost all.  The newly released black and white photo features Gaga lounging on her side wearing nothing but tiny, shrunken men that are strategically placed all over her buff body.  Noted photographer, Steven Klein is the man behind the idea and worked tirelessly to bring the idea to life.  The image was released yesterday via GaGa’s official Twitter account.  The star tweeted,

“I won’t lie I’m a bit nervous. “It’s been a while since I’ve shared some work with you.”But I’m so proud of Steven + I, we really did not sleep!”

The singers’ first scent, which contains notes of incense, honey and apricot nectar, will hit stores in August.

Aside from working on her fragrance, GaGa has been putting the finishing touches on her new album.  She recently told The Sun that it will be quite a departure from her previous efforts.

Are you anxious to catch a whiff of GaGa’s fragrance?  Were you a big fan of Born This Way?  Do you wish GaGa’s next album was in a similar vein or are you looking forward to her trying a different vibe this time around?  Let us know your thoughts in the comments below!