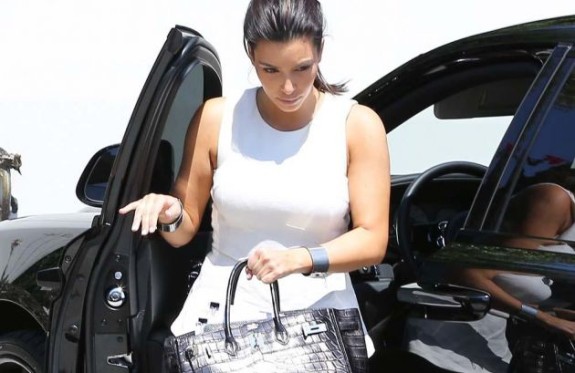 PETA and Kim Kardashian just don’t go together, do they? The organization – also known as People for the Ethical Treatment of Animals – were appalled to see that the reality star, who represented the company back in 2007, has once again decided to wear a piece of animal skin as an accessory – this time it was a crocodile skin handbag worth $50,000.

Wendy Wegner, a representative for the charity company, was saddened to see the pictures and says that by her wearing fur, animal skin clothes and handbags, it’s setting the wrong message to her millions of fans around the world. Wendy also made it very clear that these animals – such as the crocodile – were most likely still conscious as their skin was peeled off, giving them an unbelievable excruciating pain to feel.

Wegner told RadarOnline: ”For every alligator or crocodile skin accessory, an animal was likely beaten but still conscious and able to feel excruciating pain as his or her skin was peeled off. These animals feel fear and pain and they don’t want to die. Alligators and crocodiles have no real legal protection, but they have done nothing to deserve the violent treatment that they endure.

Wendy ended her message to try and seek people to watch a video, showing what the animals go through when their skin is removed: “PETA urges consumers to watch Joaquin Phoenix’s video exposé of the cruel exotic skins industry and vow today never to buy items made from the skin of alligators, snakes or crocodiles.”