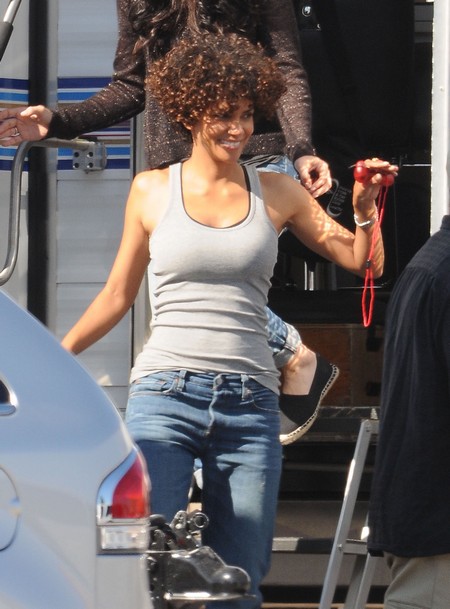 Halle Berry went up the hill to fetch a pale of water. Halle fell down and broke her crown and her career came tumbling after.

Okay, not quite, but Halle Berry was rushed to hospital after an incident on the set of her new movie. A source tells TMZ, “Halle Berry suffered a minor head injury while shooting a fight sequence on the set of her film, ‘The Hive.’ She was taken to the hospital as a precaution, but she checked out healthy and was released. She’ll continue production as planned.”

Up Halle got and home did trot, as fast as she could caper. She went to bed and bound her head with vinegar and brown paper.

Halle was rushed to hospital on Tuesday night after a fight sequence. The actress had a nasty fall and hit her head against the concrete. Halle was taken to Cedars Sinai Medical Centre in Los Angeles after the incident occurred at 10pm. There appears to have been an ambulance on scene, which allegedly transported Halle to the hospital.

Halle seems to be quite prone to these types of injuries as she also recently suffered from an ankle injury on a film she shot in Spain.

For those younger readers who do now know who Halle Berry is, just watch Catwoman and Gothika and see for yourself why Halle Berry no longer has any semblance of a career. The Razzie Award (Anti-Oscar) winning actress has suffered through heart break and poor career choices after her Oscar win for Monster’s Ball. Many point to what is known as the “Oscar Curse” where every leading lady who wins an Oscar, loses their significant others and their careers.

The only things Halle lost after her little accident were pride and memories.