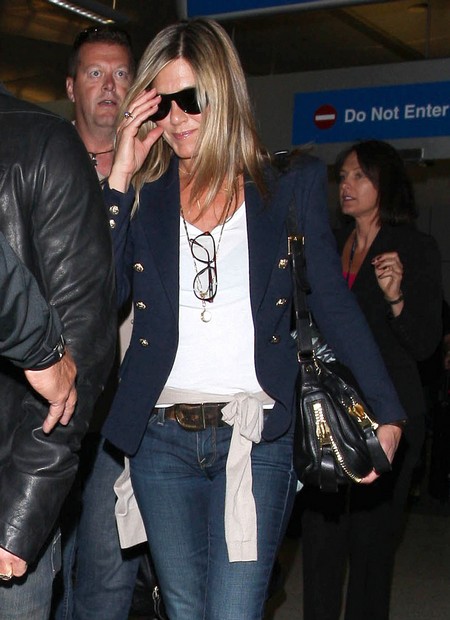 It seems Jennifer Aniston has finally come to her senses and realizes that it’s time to return to the genre that brought her fame in the first place, television.  It’s about time, considering the fact that she hasn’t had a favorable movie review in TEN years!  The Good Girl made her think a career in film was the next logical step and it looks like a decade of mediocre roles has made her realize it’s time to hightail it back to the small screen.  The National Enquirer has all the details of Aniston’s change in direction.

“Jennifer’s looking for an edgy, character-driven show along the lines of Edie Falco’s‘Nurse Jackie,’ Mary-Louise Parker‘Weeds’ or Glenn Close in ‘Damages,’” a source close to the actress told The ENQUIRER.  “She’s tired of so-so film scripts, bad movie reviews and disappointing box-office sales. She also thinks she’s getting too old to star in big-screen romantic come­dies.  “So after a heart-to-heart with Courteney, she made up her mind to reinvent herself as a serious actress back on TV where she got her start.”

Yep, it looks like best friend, Courteney Cox is the one that planted the obvious idea into Jen’s head!  I have to admit I’m never exactly running to see any of Jen’s movies but if she returned to television I would definitely take a look.  Television has always seemed like a much better fit for the actress.

What do you think of Jen’s film career?  Have you been a fan or do you still mostly connect her with her work in Friends?  If she was cast in a new series would you tune in?  Tell us your thought5s in the comments below!