Dallas’ Return to TV is a Triumphant One (Photo) 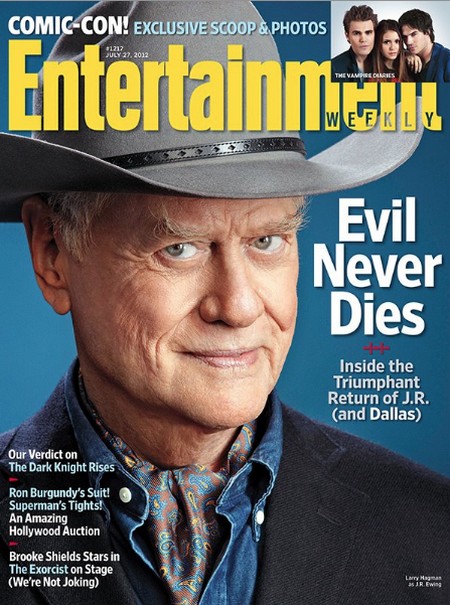 When Dallas returned to television completely rebooted on June 13th, no one really knew what to expect, but many critics expected the worst: A reworked, watered-down version of the 80’s classic that would likely die a quick death.  Instead viewers have discovered a solidly updated classic that has found the balance in blending the old with the new.  The result is that Dallas is already cable television’s top rated show!  The new issue of Entertainment Weekly covers the show in a lengthy piece.

“It’s almost dream-like,” laughs Patrick Duffy, who along with Larry Hagman and Linda Gray, and newcomers Josh Henderson, Jesse Metcalfe, Jordana Brewster, and Julie Gonzalo, anchor the new incarnation. “And God if I wake up and find out I’m playing some gnarly grandpa in a sitcom somewhere, I’m going to be so pissed off,” Duffy adds. (And for those pissed off Bobby and Pam fans, executive producer Cynthia Cidre explains why she didn’t want to bring back Victoria Principal. “No, no, no, no,” she says. “What angle could I possibly play in the relationship?”)

The dream took a nightmarish turn two days before Hagman was due on set when he called his long-time best friend Duffy with news of his cancer. “I told him, ‘You bastard. I just got a good job and you’re going to bail on me,’” says Duffy. “The nerve of you dying at the apex of my career. Unacceptable.’” Hagman worked through his entire chemotherapy and radiation treatment, infusing J.R. with the same gleeful mischief audiences love to hate. Shortly before the show’s premiere, his doctor pronounced him cancer-free. “Hagman looked me in the eye and said ‘Whaddya think, 10 seasons?’” says TNT president Michael Wright.

Have you tuned in to see the return of the Ewing’s for yourself?  Has the show won you over yet?  I have to admit I wasn’t exactly a fan until the most recent episode.  The writers’ have found their groove and these characters, old and new, are really clicking.  Tell us your thoughts on Dallas in the comments below.