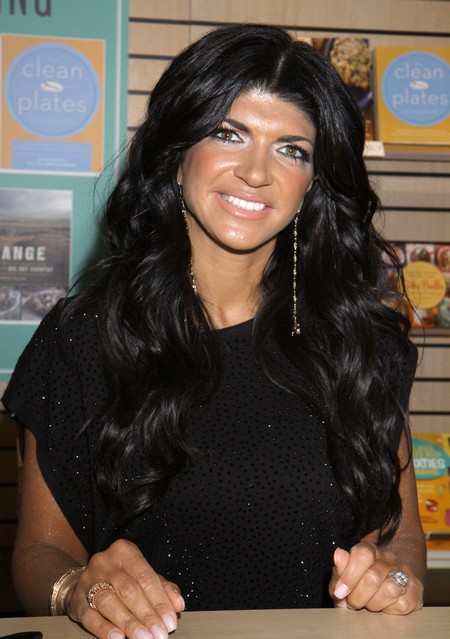 I’m guessing that Teresa Giudice just doesn’t care if she has any friends at all because in the last few months she has systematically insulted or disrespected nearly all of her Real Housewives of New Jersey costars.  I guess now it’s time for her to start on Bravo stars in general, like Bethenny Frankel.  The New Jersey crew is heading off to Napa this week for a wine tasting, RV roadtrip.  Teresa is flavor testing in order to help establish her new line of Bellinis called Fabellini.  While trying to figure out what she’d like her new cocktail to taste like she can’t help but take a shot at Frankel’s Skinnygirl cocktail saying,

Teresa may not like that, but millions of others have because in two short years Frankel was able to sell Skinnygirl to Fortune Brands’ Beam Global for an estimated $100 million.

A Giudice pal recently told Us Magazine,   “Teresa will work as hard as she can till she gets to Bethenny status. She learned a lot from Donald Trump about bringing her brand out even more.”

There’s no doubt that Teresa is shrewd and cut throat about business and making money, but is seems that everything she says includes taking a verbal shot at someone else.  That’s probably the number one reason why everyone ultimately distances themselves from her!

Are you surprised that Teresa slighted Bethenny?  Do you think Bethenny will even bother to respond?  I see a chuckle and an eyeroll more than a verbal response.  Are you a Skinnygirl fan?  Tell us your thoughts in the comments below!