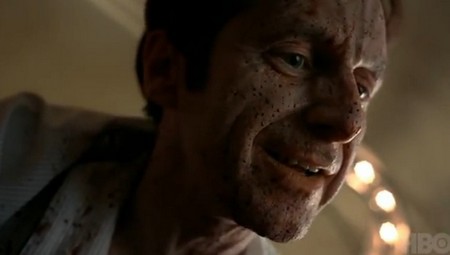 Tonight on HBO is an all new episode of my favorite television show True Blood called ‘In The Beginning.’    On last week’s episode, I was shocked! I loved that True Blood hired Law & Order’s Christopher Meloni to play The Vampire Authority Roman and thought he would stick around for a bit. However, my favorite vampire, I love to hate, had other plans and after his iSTAKE failed to worked Russell staked Roman. As Roman was talking about peace, Russell yelled, “Peace … is for pussies!” and showed Roman “The True Death.”  If you missed the episode you can read our full and detailed recap here!

I am sure Russell will be wreaking havoc on The Authority tonight !! Tonight’s episode is going to be an exciting one, that you won’t want to miss, so be sure to tune in for our live coverage HBO’s True Blood tonight at 9PM EST!  While you wait for our recap hit the comments and let us know what you think of True Blood season 5, so far!