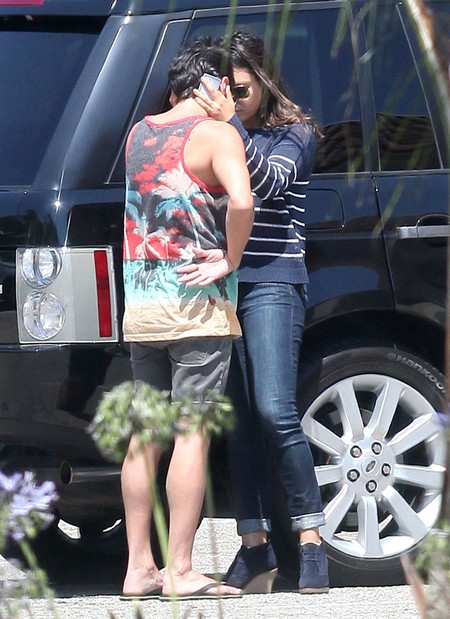 Ashton Kutcher and Mila Kunis may say they aren’t dating but they most definitely were spotted and photographed kissing this past Saturday at a party.  The twosome has been spotted all over LA in recent months, at various restaurants and hotels hand in hand, but they have sworn they are just friends.  Now according to Us magazine, they were busted getting a wee bit closer than usual in public.

“They were seated on a couch on the same side of the table and Mila was running her hands through Ashton’s hair,” a fellow party guest claimed.  “She had her elbow resting on his back and couldn’t stop playing with his hair and rubbing his shoulders.”

Mila is always pretty hush-hush about her private life and when questioned recently about her relationship with Ashton, she had this to say,

That’s not actually a denial and I would hope that she considers any guy that she’s seeing, a friend.  If they’ve been seen together all over the place and now caught kissing in public, I’m going to be that Ashton is a little more than just a friend.  Mila also seems to go for the messed up, kind of broken guys and after the last year of drama with ex-wife, Demi Moore, Ashton certainly would fall into that category.