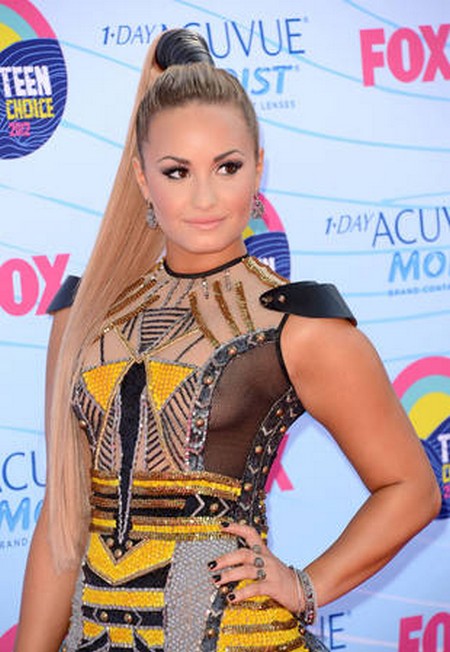 Demi arrived on the pink carpet at the Gibson Ampitheater with her morals and self-respect intact, but halfway through the posing and ego boosting, Demi showed a teeny nipple! Oh pooh Demi!

Demi channelled the love child of Jennifer Lopez and Cleopatra with her sequined yellow and silver dress. “The dress included everything, from leather epaulets to shiny sequins to feathery fringe. And, of course, we can’t forget Hollywood’s most popular accessory: a little hint of what appears to be a nipple!”

The dress moved slightly to the side while Demi was posing and the nipple screamed “peek-a-boo!” like our 17-year-old brother after he discovered the gin in the closet and swallowed it in one mouthful. No, he’s not an alcoholic and no, the gin wasn’t really gin, it was water, but we didn’t tell him that because a placebo works wonders for insanity.

Demi’s nipple has never been exposed like this before, but she has had a few serious bum flash incidents at massive singing events, where her dress was whipped up by Satan’s burps and the world could see her panties.

Demi did a wonderful rendition of Skyscraper on the night and dedicated the song to the victims of the mass killings in Colorado. She stopped halfway through the song and declared how hard and heavy the event was for her, so all is forgiven Demi!

Let’s just hope her nipples don’t decide to elope with one another.