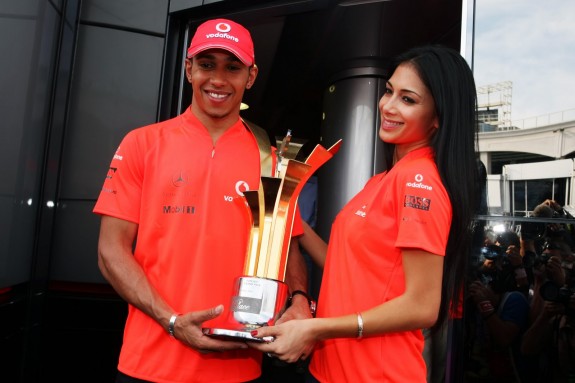 Lewis Hamilton has been sending a dozen of flowers and roses to Nicole Scherzinger, in hopes that the two can reconcile, after it was revealed the Formula 1 star had partied with rapper J. Cole and ten other girls in his hotel room until 5:30AM in the morning – spending thousands of dollars on drinks and luxury treatments.

Since the news broke last week, Scherzinger has been fuming and vowed to never speak to Lewis again, telling friends that she’s puzzled as to why her boyfriend would betray her like this, knowing that it would get out. The two had been arguing days before the incident due to Nicole going against his wishes NOT to sign the X Factor UK contract, after seeing what happened in the US.

Scherzinger explained to Hamilton that she loves the show and that he should respect her decision. He certainly didn’t take it well and decided to do his own thing, since trust was no longer in their 5-year relationship, seeing that Nicole didn’t even tell him she was signing the deal.

A source explains: “When Nicole checked in we had a request to have flowers waiting in her room. Since then, we’ve had another two lovely bouquets delivered to her filled with red and white roses. The cards all simply said ‘Love L’ with a kiss. He must be really sorry and is really going for it with the apology.”

Earlier this week, a close source to Nicole’s camp added: “Nicole has been humiliated and she’s not going to be a pushover,” a source claimed. “To say she is livid is an understatement. She’s not sure there’s any point continuing with the relationship and believes his heart isn’t in it.”

The insider added: “What kind of idiot in the public eye humiliates their girlfriend like that, especially someone as beautiful and successful as Nicole? Lewis’s behavior this week could be the final nail in the coffin.”