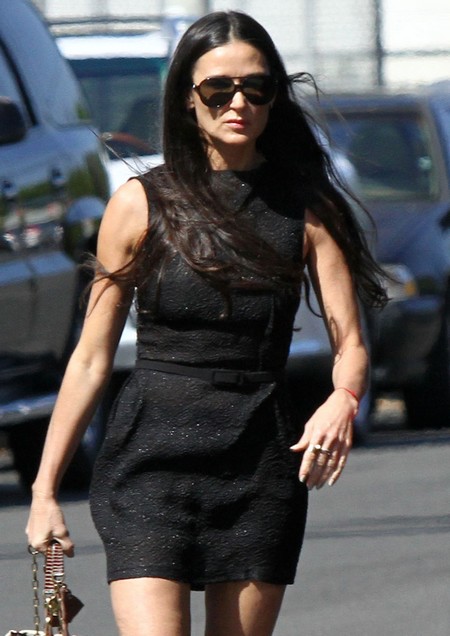 Demi Moore has experienced the equivalent of a nervous breakdown combined with nuclear war. She has been to hell with Ashton Kutcher the past year or so, but now Demi needs to prepare her Valium IV line again, because new pictures have emerged of Ashton having sexy facial time with his new love Mila Kunis.

A friend told RadarOnline, “Demi is devastated that Ashton has moved on so quickly and is dating Mila. She is beyond heartbroken. Even though Ashton cheated on her all the time, it was with random girls, it wasn’t a relationship like it is with Mila and that and that is what is killing Demi now.”

Imagine for a moment how it would feel to you if your ex was dating one of the sexiest women in Hollywood and their facial snuggling was plastered all over the internet. You would bash your own head in with a baton after swallowing a bottle of pre-natal vitamins.

The source continues, “Seeing photos of him kissing another woman is too much for her to handle, it’s like having her nose rubbed in it time and time again. She kind of knew it was definitely over between them but I think she was still holding out a little hope for a reconciliation — now he’s actually dating someone else she knows that’s not going to happen.”

Bar the poor writing skills from the National Enquirer, we actually envisioned Demi crying in every room of her house and rubbing her face in one of Ashton’s shirts.

“Each time Demi hears about Ashton and Mila it breaks her heart. She really loved him despite the flaws in their marriage and to see him dating someone new, who is so much younger than she is, is like a knife in her heart,” the source says.

Shame, perhaps Demi should head to the nearest chemist and stock up on Prozac and ice cream?