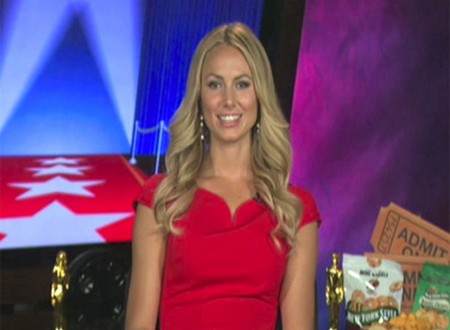 Hollywood Hiccups’ very own “Mr. Hollywood” Shannon Rose talks with model/actress Stacy Keibler, girlfriend to George Clooney about her life experiences and her advice on looking your best.

Stacy has over 20 years of experience in both television and film. She started acting at the age of six, and has been seen in numerous films, such as “The Pelican Brief” alongside Julia Roberts, Denzel Washington, and Sam Shephard; “The Firm” with Tom Cruise, Holly Hunter, and Gene Hackman; and “True Lies” with Arnold Schwarzenegger and Jamie Lee Curtis. She was also among the final three contestants in “Dancing with the Stars” and has worked as a “Nitro Girl” for World Championship Wrestling (WCW).

Stacy discusses with Shannon her advice on getting “Red Carpet-ready,” her experiences with WWE and “Dancing with the Stars,” and her role with New York Style’s Bagel Snack Star Sweepstakes.

Robert Pattinson Still In Touch With Kristen Stewart, Discusses Twilight And His…