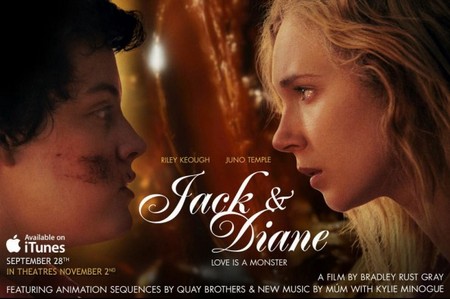 Break open Pandora’s Box and cry in a right winger’s lap, Kylie Minogue is in a sexual lesbian romp with Elvis Presley’s granddaughter! No, we’re not joking.

Riley Keough, The King’s granddaughter, is the girl who eats Kylie’s face.

The movie plot is about an innocent teenager called Diane, played by Juno Temple, who falls for Jack. Get it? Jack and Diane…?

Diane’s mother sends her to boarding school in France, but Diane is as naughty as that kid who always ate his hands in class, and continues her relationship with ol’ Jackie. She is horrified by the changes in her body (puberty is such a soul crushing experience) and she experiences vivid nightmares of werewolves! Oh poopie!

Oh, and if you haven’t figured it out yet, Jack is played by Riley Keough, who is a woman…

This doesn’t sound like a fun movie, at all. Why would we want to watch another movie with crazed werewolf bitches eating pancreas and faces?  Taylor Lautner’s llama face was bad enough in Twilight, now we’re stuck with an Australian pop singer and the granddaughter of one of the most famous musicians in the history of the cosmos, having a kissing and face sucking session. This might turn some people on, so who are we to judge the film’s thematic content?

Take a look at the film’s theatrical poster. The tagline is “Love Is a Monster”.

Renier132 posts0 comments
You might also likeMore from author
Movies