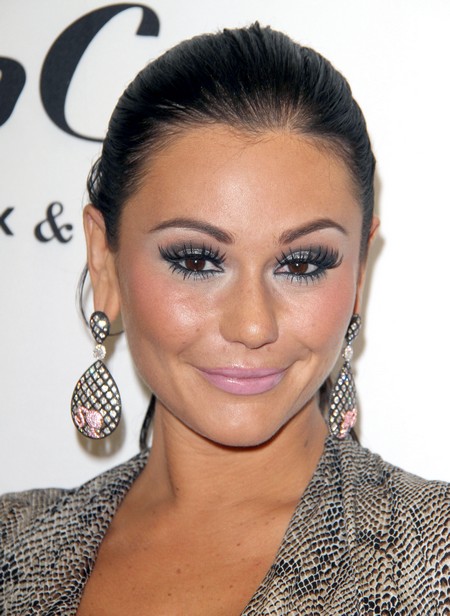 Why does a 26-year old woman go and do this to their face?  I’m talking about Jenni “J-Woww” Farley of The Jersey Shore and its spin off show, Snooki & J-Wwoww.  She is arguably the prettiest girl on the MTV shows and while she freely admitted to having implants, she denied having any other type of work done.

That statement was believable for the first couple of years because J-Wowww seemed like a constant work in progress.  She gained and then lost weight.  She started hitting the gym much harder, cut out a lot of alcohol and simply grew up.  The Star Magazine cornered the young reality star on her changing appearance last summer and at the time she had this to say,

“I lost 15 pounds and my cheeks became more defined,” she explains. After she began weight training four days a week with her boyfriend and trainer of more than one year, Roger Williams, using Ab Cuts and eating small meals every two to three hours. “I don’t want to lose any more weight. I just want to keep toning and eating healthy. I’ll probably get Botox by the time I’m 30, and have my breast implants redone in a few years after I’ve had kids.”

It looks by saying age 30, she actually meant 26.  If you check out the video clip below you’ll see that J-Wowww can barely move her face and her lips are very puffy.

Do you think she needed to have fillers and Botox injected into her face?  Is it just everyday maintenance in Hollywood or is it a shame to see a young woman take such drastic steps already?  Tell us what you think in the comments below!