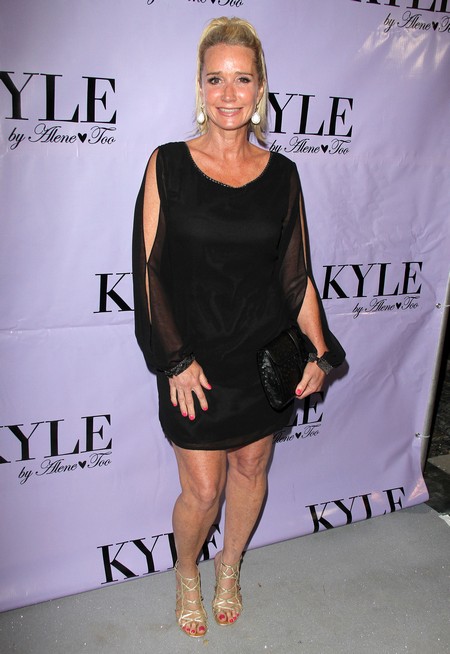 Kim Richards had a really rough time on the most recent season of RHOBH. She was often incoherent while on camera and clearly had developed some sort of drug or alcohol problem.  It was the elephant in the middle of the room. Everyone saw it and pretty much knew, but dared not confront her or mention it on camera.  Eventually Bravo producers ushered Kim off to rehab where she spent a month detoxing.  Kim later admitted during a reunion show that she was an alcoholic.  Now comes word from Radar Online that the newly sober star may have already relapsed.

“Kim has appeared to be totally stoned whenever I’ve seen her recently,” a source close to the star tells RadarOnline.com. “Her speech is slurred, her eyes are glassy and she’s incoherent at times.  She recently had a nose job and was prescribed pain pills to help her through the recovery and she appears to have developed a real liking for them.  Addiction specialists advise all recovering addicts not to undergo any elective surgeries for at least a year after leaving treatment, for this very reason. A person that has substance abuse issues should not have ready access to strong, addictive medications, it’s just begging for trouble.

Kim was taking Vicodin for the pain while she recovered from the surgery and Ambien to help her sleep, and judging by her recent behavior, in my opinion, she is still taking them, in some quantity.  She mentioned recently that she wants to undergo a second nose job as she claims her dog jumped up and hit her in the face.  She said she suffered some damage and needs corrective surgery. It just doesn’t ring true to me though and it is really very worrying.”

Do you think Kim has slipped back into her old addictive patterns?  Was she foolish for undergoing the surgery so soon after her stint in rehab?  I’m betting her sister, Kyle Howard, is flipping over this situation. Kyle has been her biggest supporter but drops a million tears over her sisters bad judgment on any given day.  Tell us your thoughts on Kim and her addictive behavior in the comments below!