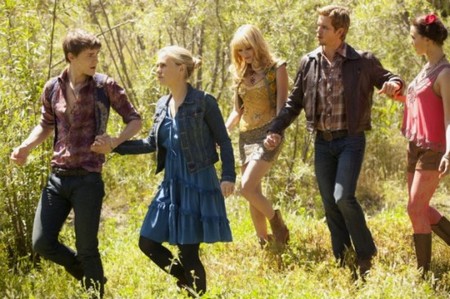 On last week’s episode, Sookie became excited when she learned that she could become normal.   She was told by another faerie that if she used her powers too much she would eventually run out of them.  The reason she would lose her powers is because Sookie is only 1/2 fae.  If you missed last week’s show called “In The Beginning” we have a full and detailed recap here for you.

On tonight’s episode at Authority headquarters, the Chancellors revel in the afterglow of recent events; Eric gets a message from Godric; Bill is shaken by a distant memory. Helped by Claude (Giles Matthey) and his sisters, Sookie and Jason visit the site of their parents’ deaths, with shocking results.

Tonight’s episode is going to be another bloody exciting one, that you won’t want to miss, so be sure to tune in for our live coverage HBO’s True Blood tonight at 9PM EST!  While you wait for our recap hit the comments and let us know what you think of True Blood season 5, so far!

TRUE BLOOD SEASON 5 EPISODE 8 ‘SOMEBODY THAT I USE TO KNOW’ LIVE RECAP HERE!