Jersey Shore’s JWoww To Film Snooki’s Birth: ‘I’ve Seen Her Bent Over In So Many Ways’ 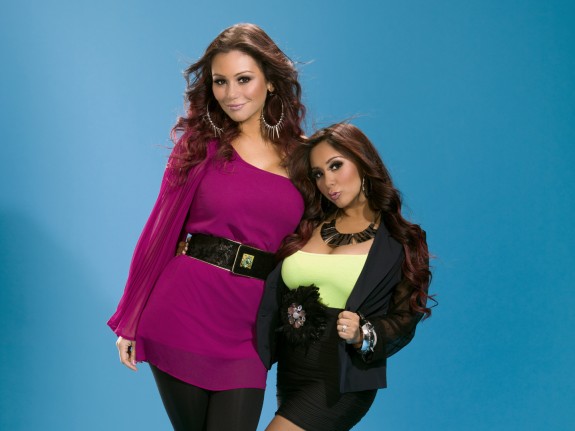 Jersey Shore’s JWoww has said that she’s getting ready to record the birth of her best friend, Snooki‘s birth. The reality stars, who met in 2009 when the first season of the hit show started shooting, have been very good friends ever since and they have even become so close that Snooki, real name Nicole Polizzi, is willing to have her film the birth of the little one.

JWoww and Snooki’s friendship has been played out every Thursday evening on MTV, on their spin off show, Snooki & JWoww, and fans have seen how Jenni ‘JWoww’ Farley has been supporting Polizzi throughout the process of going through pregnancy whilst filming a TV-show. It wasn’t a shock to see that these two got along so well – with their matching personalities – but recording another person’s birth?

“She wants me to record it,” she told E! Online. “I’m going to set up a tripod, right there, zooming in.” When asked if she was a little shy about filming her friend giving birth, knowing that it’s not exactly in her place to do it, she says: “Listen, I’ve seen that girl bent over so many ways. Sideways, I’ve slept by her, there’s nothing that can happen with that girl that won’t surprise me.”

Meanwhile, Snooki explained how pregnancy has made her become more responsible, telling Us Weekly: “Me and Jenni got closer just because I’m not going crazy all the time, so she’s not getting annoyed with me. I’m kind of the responsible one!I definitely trust Jenni and [boyfriend] Roger babysitting my child. Jenni said I scared her with being pregnant and engaged, so I don’t think we’ve [encouraged them to start a family] at all.”