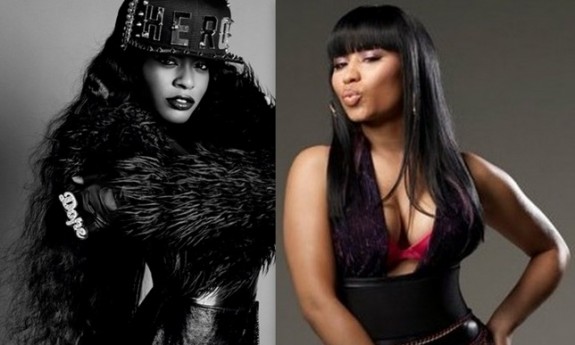 Feuding is what the female rappers do best, surely. Azealia Banks, the new big thing, has already made her name at Coachella earlier this year, while also managing to create a buzz in the UK as her song ‘212’ entered the charts. So, it would make sense for the singer to join Nicki Minaj on her European ‘Pink Friday’ tour, right? Well not according to Nicki.

Azealia posted on her Twitter page that she had been asked to join Minaj on her European leg of her tour, as her supporting act, but continued that she will not be able to take on the offer because she is still recording her debut album – set to be released later this year. She tweeted: ‘I got invited to tour with Nicki Minaj in Europe but I cant go because I have to finish my album during that time. :(‘

Hours later, Minaj tweeted on her page: ‘#ManTheseBitchesDelirious,’ which had everyone, including Azealia, thinking it was about her. Banks is not someone who’d just back down from an argument, especially when it’s on Twitter. Instead of letting the small beef go, Banks made sure that she had the last word when she twitted DIRECTLY to Nicki.

She posted: ‘I could be really unprofessional and post emails between ur manager and my booking agent but I won’t.’ We can’t wait for Nicki’s reply, most likely another ‘Stupid Hoe’ record. Are you excited?! Ha.