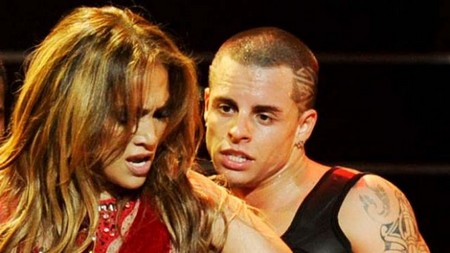 It looks like Jennifer Lopez is getting ready to cut loose boyfriend of nearly a year, Casper Smart.  There has been a ton of speculation from the get-go that the much younger Casper was simply using Jen for her money and connections.  He went from backup dancer to lead choreographer in under two months and seems to be quite the clinger.  He has been photographed often with her twins, Max and Emme, but when it comes to parenting or discipline, Casper takes three giant steps back while the kids act like out of control brats backstage during rehearsals.

RadarOnline reports: “Jen is currently on tour with Enrique Iglesias, and Casper is the head choreographer of her show in which he also dances. It’s tough being on the road — this isn’t Jen’s first tour and she has been feeling more like Casper’s babysitter than girlfriend. Casper likes to hang out and party with the other dancers and that just isn’t Jen’s scene. She is all business and is the utmost professional. Jen is absolutely going to break up with him, they just don’t have a long term future together. Casper will most likely be sent packing when the tour ends in Miami. Jen admits that she fell for Casper and that he was exactly what she needed at the time to help get over her painful split with Marc, but she is just ready to move on now,” says a source close to the singer.

Sure, Casper was a fun diversion at first and maybe Jen is happy to pave his way (while lining his pockets) to an easy career, but I’m thinking when he started popping up in gay clubs and massage parlors, well, her attitude has likely changed.  That hot toy has turned into an embarrassment and Jen needs to ditch him quick!  Do you think a split is imminent here?  Tell us your thoughts in the comments below!