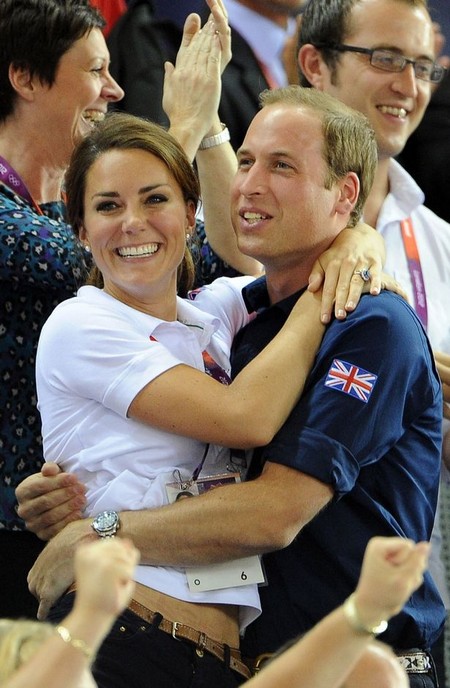 It’s really obvious that Prince William completely dotes on wife, Kate Middleton, but it’s not something that he really likes to have put fully on display.  The couple has attended various events at the Summer Olympic Games, taking place in London, but they’ve tried to keep as low a profile as possible.  William dreads the thought of them stealing any attention away from the athletes that have spent years training for the opportunity to compete there. People Magazine has more of William’s thoughts,

“I was absolutely dreading they were going to come and show myself and my wife and that would have been very embarrassing,” William says of a kiss cam at the Olympic Velodrome, where the royals watched Scottish cyclist Sir Chris Hoy win gold and set a new world record in the men’s team sprint.   “That was absolutely fantastic, the world records being beaten and the atmosphere in there was electric,” William said in an interview, alongside Prince Harry, to the BBC, of the golden moment.

Both of the Princes were asked about their grandmother’s grand entrance into the Opening Ceremonies of the games,

“Both of us were slightly surprised with our grandmother’s secret hobby of parachuting,” Harry said of the moment when the Queen appeared to jump out of a helicopter above the Olympic Stadium with Bond, Daniel Craig. “We were kept completely in the dark about it, that’s how big the secret was,” William said, adding, “She did such a good performance that she’s been asked to star in the next Bond film. I’m thrilled for her.”

Do you think that it’s a nice gesture on the part of William to not want to take attention off the true stars of these games?   Were you glad to catch a glimpse of Wills and Kate on the Kiss Cam?  How about those honeymoon photos? Tell us what you think in the comments below!