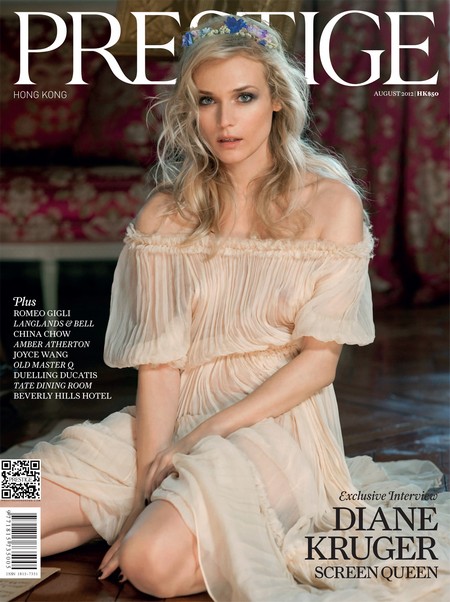 The beautiful German born actress Diane Kruger graces the cover of the August 2o12 issue of Prestige Magazine Hong Kong.  In the the interview for the magazine Diane talks about how it is all about the acting.  She says, “What I actually prefer about my job is being on set, and everything that comes with that.”

The hard-working Kruger took the time to talk exclusively to Prestige Hong Kong after wrapping her latest venture, The Host, and as the French-language Farewell, My Queen, in which she plays the ill-fated Marie Antoinette, opened to largely positive reviews in the US. Relaxing away from the Hollywood spotlight in her adopted North American base of Vancouver (she also keeps a home in Paris), the actress talks of her goosebumps on being sent the script for Queen, and her love of “the circus life”.

After training for the ballet, Kruger switched to modelling in her teens, then made a further sideways leap in her mid-twenties by enrolling in the prestigious Cours Laurent drama school. The result has been a decade-long acting career in which she was propelled to prominence almost from the outset with a starring role in Troy – yet followed that up by defying convention, taking on a variety of roles and, as she puts it, “not [being] locked down in a language, or an accent or a culture”.