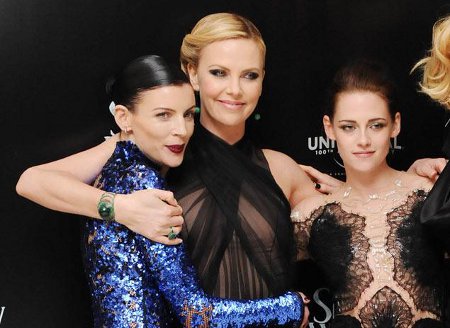 Twilight actress, and now Hollywood-proclaimed trampire, Kristen Stewart, just can’t seem to catch a break. After coming out with a public apology for sleeping with her Snow White and the Huntsman director, Rupert Sanders, Kristen has done everything from hang up her shower cap and refuse to bathe to . . . yep, sleeping with another producer. At least, that’s what her ex-boyfriend Robert Pattinson is leading us to believe.

It’s perfectly understandable that R-Pattz is angry. But does he have the right to demean K-Stew’s image even more? In an outrage, Robert claims that Kristen Stewart has sought solace with her Welcome to Riley’s producer Giovanni Agnelli for more than just a couch to sleep on.

According to Radar Online., R-Pattz has leaped off the deep end: “Rob knows Agnelli and has been calling him a lot since Kristen has been there . . . [Robert Pattinson] wants to know why Kristen is staying there at his house. He is super angry now and has accused Giovanni of sleeping with Kristen too. Giovanni got a call from Pattinson around four in the morning, threatening him if he has been sleeping with Kristen. Rob is beside himself over Kristen’s betrayal. No one has ever seen him like this.”

What do you think Kristen’s intentions are? Do you think she just needs an empathetic shoulder to cry on, being that her own parents wouldn’t take her in or forgive her? Let us know in the comments section below!