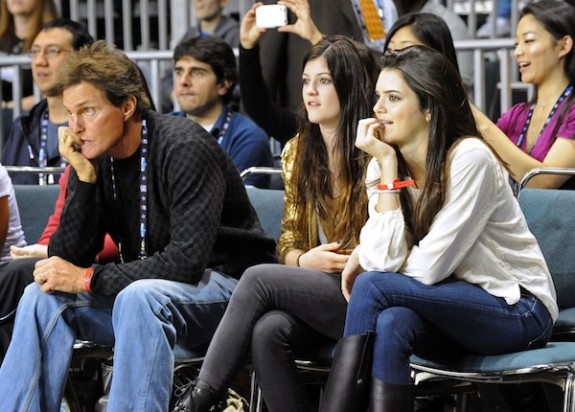 Bruce Jenner, a former Olympian competitor – who most of you may only know as Kim Kardashian‘s step-dad, has said he watches his youngest daughters Kendall and Kylie Jenner like a hawk because of the downside of being in the public eye can have on teenagers, especially at the age of thirteen to eighteen.

Jenner, who is currently in London as a correspondent at the Olympics, spoke to DigitalSpy on how he deals with the pressure that his girls may be under, how to always keep them humble and make them realize that they’re fortunate to be living a luxury lifestyle, despite the fact that his two little girls try and keep away from the spotlight as much as possible to focus on their own business ventures.

“I’ve been in the public eye since the [Olympic] Games 36 years ago,” he says. “I know the game, I know how it’s played. I watch these little girls like a hawk. I talk to them all the time about keeping this proper perspective. You’ve got to look at this as a business, and it can be a very good business and you can build a very nice career here.”

“But you have to keep it in proper perspective about what’s going on and I watch them very closely.” Bruce later praised his girls and added how proud he is of their success: “They have been great kids, good people, how they treat other people, the way they’ve dealt with it – I’ve been very impressed with them, because it’s not easy.