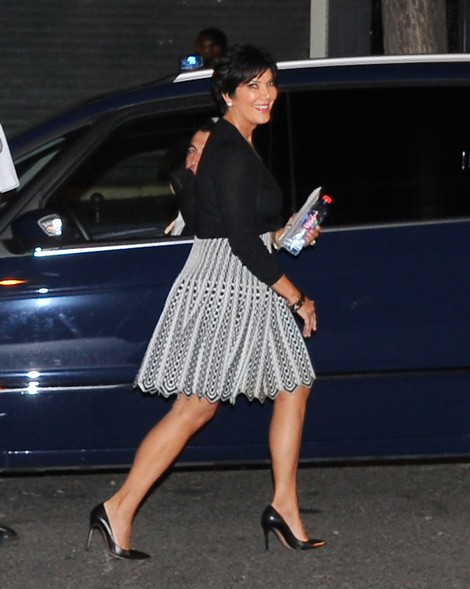 Kris Jenner is not really perched atop a moral high ground, so it was quite a surprise to hear that Kris is angry at Kanye West’s Perfect Bitch tribute to Kim Kardashian. In true trailer park-gone-royal fashion, Kim is flattered by her boyfriend’s tribute to her – which describes how he’s found his perfect woman – but Kris is as pissed off as a cake seller at fat camp, because Kanye refers to Kim as a bitch. Now, now, Mama Fame Whore, didn’t the jingle of financial gain ring in your ears when your daughter released a sex tape which was watched by men in basements which reeked of glue and fear?

A source told the Daily Star, “Kris told Kim to get a grip, saying no woman should be called such a term.” Wow, we wonder what the fame whore would say about our Kardashian name calling…

Kanye debuted the song at New York’s Dream Downtown club last Friday, where he “got jiggy” with Leonardo DiCaprio. He allegedly pulled out a laptop from his knapsack and asked DJ Reach to play his new songs. We heard DJ Reach reached for a bottle of Xanax when he saw Kanye approach him, because no-one says no to Kanye, not even Tom Cruise.

The song revolves around Kim’s famous figure and junk-in-the-trunk butt which made her more famous than two prostitutes in a playpen at a Jerry Springer road show. Kanye recently referenced Kim’s ex Kris Humphries in a song called Way Too Cold.  In this aptly titled Humprhies single he rapped, “I’ll admit I fell in love with Kim/around the same time she had fell in love with him/Well, that’s cool, baby girl, do your thing/Lucky I ain’t have Jay drop him from the team.” We always knew Kanye was insane, but these lyrics point to a certifiable lunatic.

Perfect Bitch will be featured on Kanye’s upcoming album. Perfect Bitch is also Kris Jenner’s nickname, so it’s a win-win, wouldn’t you say so too Kardashians?