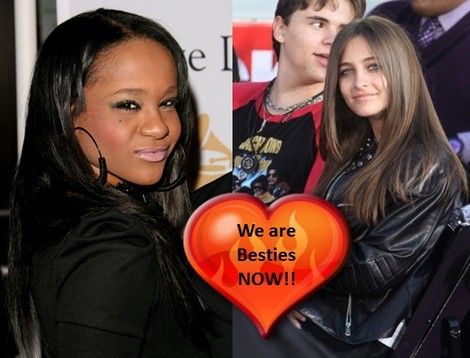 Michael Jackson’s daughter Paris Jackson, 14,  and Whitney Houston‘s daughter Bobbi Kristina Brown, 19, are said to be hooking up.  Allegedly Bobbi Kristina reached out to Paris during the recent Jackson family feud to lend her support.

The National Enquirer reports, “The two girls talked for hours and realized they had a lot in common. They both lost superstar parents at an early age, and their families are notorious for airing their dirty laundry in public.  The girls now consider themselves friends, and Krissi has even invited Paris to be on her reality show. Paris said her Aunt Janet would hate it, but if she gets her grandmother Katherine’s permission, she’d love to do it.”

Apparently Bobbi Kristina is determined to help Paris avoid the pitfalls of fame because she would know right?  What do you think of the two famous daughters hooking up?  Hit the comments and let us know!