Report: Mariah Carey Is Staging An Intervention For Rihanna 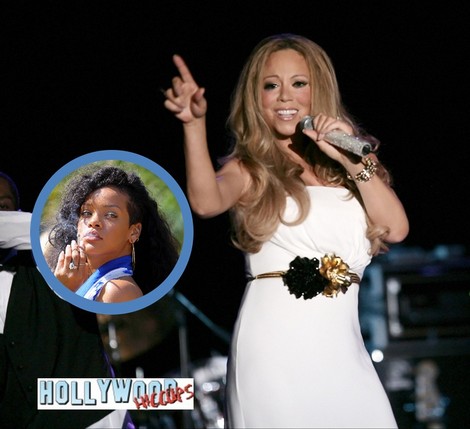 So everyone knows Rihanna has been partying like its 1999, displaying her wares whenever she can and lusting over Chris Brown.  Rihanna has been so overexposed the last couple of months she really cannot shock anyone anymore, and she has become almost irrelevant.   Now apparently Mariah Carey is concerned about Rihanna, go figure,  and wants to stage an intervention, yep seriously an intervention.  Mariah wants her to wash Chris Brown right out of her hair and start acting like a vestal virgin.  As if….

Now who is making these claims well, Star Magazine, at least according to website Rhymes with Snitch.

“Mariah Carey was upset by rumors that Rihanna was reconnecting with Chris Brown.” Mariah, 43, had a horrible marriage to record exec Tommy Mottola and later endured a public breakdown. “She sees a lot of herself in Rihanna and wants to protect her,” the insider says. Mariah has been trying to convince Rihanna, 24, to chill out on the partying, going so far as to suggest RiRi move in with her and that they do a few songs together. “Rihanna says she’s thankful for the concern,” says the source. “But it’s going to take a lot more to tame her!”

What do you think does Mariah have a snowballs chance in hell of calming Rihanna down?  Hit the comments and let us know your thoughts.