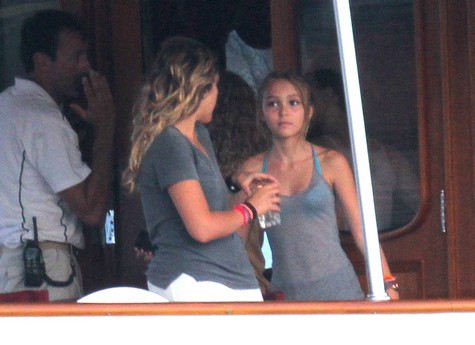 Actress and ex girlfriend of Johnny Depp, Vanessa Paradis took their kids Lily Rose and John “Jack” Christopher on a small boat ride to a large yacht while on vacation in Saint Tropez, France on August 15, 2012. During the small boat ride Vanessa flipped the cameras the bird while trying to hide their faces.

Vanessa and Johnny announced their split earlier this year after 14 years together.  During a recent chat with Harper’s Bazaar via Popsugar, Vanessa explained what she looks for in a man, saying: “Well, my type is obviously creative …creative, with burning eyes and a pretty.”  She neglected to mention that her type is also a self-indulgent flake indulging in an extended mid-life crisis.

This is probably a good time to take a family vacation. There were reports recently that Lily-Rose is turning into a real wild child teenager! With Lily-Rose’s parent splitting it’s been getting to her and now her parents are fearing that she is going to turn into the next Lindsay Lohan. That could quite possibly be a parent’s worst nightmare.