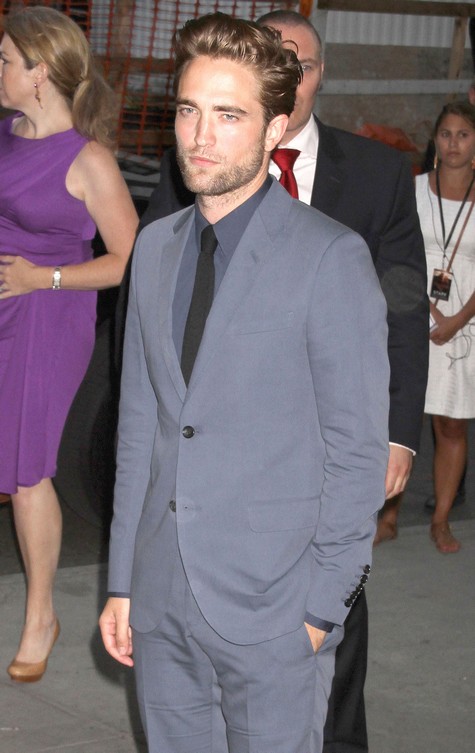 Men can be just as insecure as women, even Robert Pattinson.  The newly single actor appears to be a bit overly concerned with his weight since the crushing split with home wrecker, Kristen Stewart.  Rob is in the awkward position of having to do publicity for his new film, Cosmopolis, while still reeling from the embarrassment caused by Kristen.  These interviews can’t be easy and instead of commenting on his relationship he is focused on his body and his belly, telling MTV First,

“It becomes funnier [as you go along] as well. The mechanics of a sex scene, ‘There’s a climax’ and stuff. You’re trying to figure that out…That was my idea, the climax scene and saying, ‘Do you find this interesting?’ afterwards. We’re doing it in one take, you have to figure out what to do. I’m trying to hide my belly.  I had to be shirtless for a photo shoot, so I asked a nutritionist what’s a diet in which you can still drink as much as you want. She said a liquid diet. II was so impressed with myself yesterday. I took a pee that was four minutes long.”

Is Rob really on a serious diet or is he just smart enough to divert attention from the topic that every single interviewer wants to discuss: Kristen?  I hardly think he has needed to lose anything at all but this topic gives all of the Twihards’ something else to obsess over, doesn’t it?  Do you think Rob should be dieting or the least bit worried about his weight?  Tell us your thoughts in the comments below!