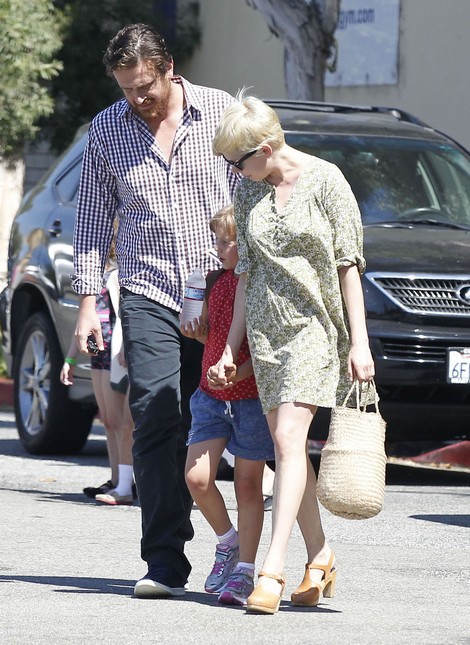 Things seem to be getting pretty serious between actors Michelle Williams and Jason Segal. Not only are the two often seen out and about together looking super smitten, but Michelle’s daughter Matilda appears to be quite fond of her mom’s beau as well.

Michelle gave birth to Matilda six years ago while she was involved with the late Heath Ledger.  While they broke up before his accidental overdose back in 2008, they both were hands-on parents who put their daughter before anything else.

While Michelle grieved privately over her daughter’s father, there were rumors that she was locked in a feuding custody battle with Heaths’ father Kim Ledger.  They also argued over inheritance and who should get his various awards. Things ultimately worked out and the two buried the hatchet. Somehow I can’t see Michelle being that malicious and not allowing her daughter to see her grandparents.  So since Michelle has been getting further involved with the Forgetting Sarah Marshall actor Jason, reports surfaced that he has done the gentlemanly thing and reached out to Kim. According to Radaronline:

“Jason got on the phone and introduced himself to Kim, and then invited the Ledgers to use his home whenever they wanted to fly in from Australia to visit Michelle and Maddie,” said the source close to the Ledger family.

“Kim was blown away by Jason’s generosity and the two hit it off right away. Now Kim’s given his blessing for Jason to marry Michelle and be a stepdad to Matilda.”

Ok, can we say amazing fella! Clearly he has Matilda’s best interest at heart – only further cementing his relationship with Michelle. I kind of like the two of them together, Michelle is one of my favorite actresses and Jason is absolutely hilarious.  I say good luck t them both, I hope this one works out!